Cleaner Tools for a Brighter Future 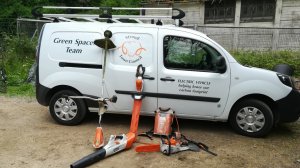 In order to reduce our usage of fossil fuels such as petrol and diesel, we have been replacing power tools with cordless electric versions where this is possible.

Whilst there are still some tasks that still need the oomph of a petrol strimmer, we expect the technology to move quickly, hopefully reducing the need for petrol-powered tools to a minimum in the very near future.

The batteries are expensive to purchase, but if you purchase tools from the same brand they are interchangeable, so once a number are purchased, the tools themselves are cheaper than the equivalent petrol version. Looking at whole-life costs it is likely to be considerably cheaper to run these than the equivalent petrol versions, because it is cheaper to charge the batteries compared with buying petrol. A quick look online will show the prices of the tools, batteries and their petrol powered equivalents.

Other benefits that come with cordless electric tools we have found include:
Run on clean energy, produce no toxic fumes
Generally lighter, reducing fatigue
Lower vibration levels, so safer for the operator
Far quieter – a real bonus in public spaces.