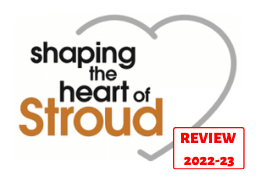 Back in 2014 and 2015, hundreds of people took part in the initial consultation for the plan for Stroud town centre.

It is now nearly six years since the Plan was adopted by Stroud District Council following a referendum when 91% of electors voted to accept the plan.

The plan also paved the way for many of the projects included in the Levelling Up Fund bid, for example proposals to promote walking and cycling, opening up Brunel Mall to link to the station car park and providing real-time passenger information. The government's decision on the bid is due to be announced in the near future.

Some of the proposed development sites in Stroud District Council's new Local Plan, which is currently undergoing an independent examination by the Planning Inspectorate prior to adoption, were first proposed for development in the NDP. These include the Cheapside area, Merrywalks Arches, the Police Station and former Magistrates' Court site, and Beeches Green.

The Council wants to hear the views of residents, businesses and visitors. If you like an area or can identify one which you think needs improvement you can drop a pin on the map and upload a photo to show the Council exactly why you've commented.

"An extension to the area covered by the plan has already been approved by Stroud District Council, so we need to look at whether we need new policies covering these additional areas, which include the Tesco, Homebase and Waitrose sites," said Stroud Mayor Stella Parkes.

Click here to have your say before 31st December 2022.

The following documents are preliminary and have been done as part of the review and have not been adopted.