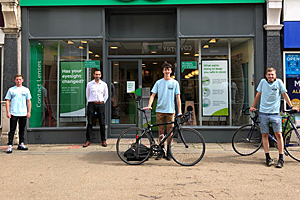 Stroud Town Council has been inundated with nominations for its Lockdown Heroes.

Good neighbours, postal workers and NHS staff were among the scores of nominations,

Among the winners are the Access Bike Project a group of young people who refurbished more than 40 bikes for key workers and helped set up the Stroud Pedallers, who delivered over 590 items to shielded and protected people during lockdown.

"Throughout lockdown GBSN has been running free virtual 1-1 support appointments with trained breastfeeding counsellors. They have ensured that new parents still have a chance to access support and encouragement to breastfeed successfully," said the nomination.

The staff at Bluebird Care and Penna Homecare were nominated for their incredible care and support during lockdown.

The team at The Long Table, a Community Interest Company, won an award for preparing and delivering over 31,000 meals to the community from mid-March to 31st May.

The Paganhill Community Group, Megan Sheer and Graham Stanley of Ring and Ride were all honoured for going above and beyond to help in their local community.

Samuel Gilbert was named a hero for supporting the homeless of Stroud, sourcing accommodation, food, support and clothing.

The Chair of Stroud Chamber of Trade, Tony Davey, was nominated for his tireless work supporting and promoting the businesses in town, sharing information about the help available and liaising with all the relevant bodies.

"Congratulations to all those who were nominated. This is such incredible proof that Stroud's sense of community is alive and thriving," said Town Mayor Kevin Cranston.