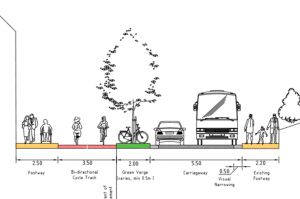 An innovative project has been launched to make the A419 Stroud to Chalford route welcoming for motorists, cyclists and pedestrians.

The initiative suggests creating a designated footway and cycle track along the busy route.

It looks at whether and how the A419 between Stroud and Chalford could be improved, making it welcoming to everyone, not just cars.

The study is the first step in a longer process to look at how to address the issues faced by all users of the A419. There will be numerous opportunities for people to make comments as the study progresses.

The study highlights eight places – 'villages' – along the route where extra steps could be taken to strengthen local communities. There could be speed limited zones in the villages with added measures such as raised level zebra crossings, visual narrowing of the road and improved junctions and crossings.

"If this project were to be built people would feel safer cycling and walking along parts or all of the Golden Valley route, giving local residents the option of making shorter journeys on foot or bike as well car (rather than only by car as it is now for many) could lead to a great reduction in CO2 emissions and a general improvement of air quality for all," said Stroud Town Mayor Kevin Cranston.

"While this is very much a vision at this stage it gives us a foundation to work from."

"We are delighted to see this imaginative and ambitious design. The Golden Valley standard could be an exemplar for road designs of the future, giving people a genuine choice about how to travel."

At 54%, transport is the largest single contributor to Stroud District's carbon footprint, and most of that comes from passenger cars. Cutting carbon like this in the Frome valley would make it a safer, healthier, more neighbourly place to live and work.

To find out more go to www.goldenvalleyroute.net.