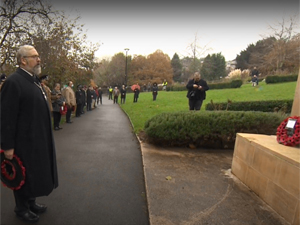 Stroud Town Council paid tribute to those who sacrificed their lives for the country in a very scaled down event.

A small private service was held at the Cenotaph in Park Gardens. Officers from 50 Squadron 29 Regiment The Royal Logistic Corps provided a military presence.

The Town Council had planned a scaled down private event with live-streaming, but this was cancelled when lockdown rules were announced.

The Government then sent out new guidance which did allow events to go ahead, but on a very reduced scale.

"We held a very small wreath laying ceremony, which we filmed and shared online after the event," said Town Mayor Kevin Cranston. "As a town we felt it was important to hold an event, however small, to pay respect to those who we owe so much."

The Town Council appreciates the support and understanding of local veterans' organisations which either allowed the Council to lay wreaths for them or laid them privately.

Stroud District Council cleaned the war memorial and the Town Council's Green Spaces team renovated the flower beds around it.