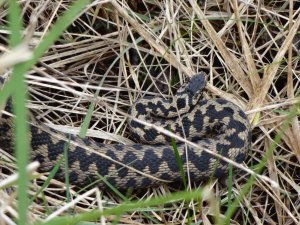 Stroud Town Council has condemned the killing of an adder, a protected species.

A member of the public reported finding the body of the snake. It appeared to have been repeatedly hit.

The incident on 3 April was reported to Gloucestershire Police. The location of the attack is not being released to the public to prevent adders being targeted in the area.

"We were deeply saddened to learn of this horrible incident, which is a criminal offence under the Wildlife and Countryside Act (1981), which prohibits the intentional killing and injuring of our native adders," said Dr Julian.

"One of our most vulnerable native species, adders are fast vanishing from our countryside as loss of habitat and centuries of persecution has reduced their numbers to a point where they are becoming extinct across entire counties in southern England.

"We are working hard to safeguard and protect the tiny populations of this timid and secretive snake that still remain on the Cotswolds, some numbering only a few individuals, before they too disappear forever from our landscape.

"These particular animals were well known to the Stroud Town Council rangers, who had been studying and carefully monitoring them over a number of years. Therefore it is particularly painful to lose such a well-loved animal in such a violent and unnecessary manner."

Witnesses are asked to contact the police by phoning 101 or completing the online form with the incident number 401 (7 April).