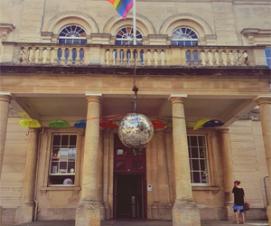 The Sub Rooms is just £20,000 off its Crowdfunder target and is appealing to people for that last push to get them over the line.

Hugh Phillimore, Director of the Sub Rooms, says the team have been buoyed by the support so far and what the venue means to the community.

"It's been a very challenging month or so for us as we've been heavily affected by the Test and Trace system and the pandemic. So the support of our community has had a huge impact on the team," said Mr Phillimore.

'We are so grateful to people for getting behind this Crowdfunder. We now need anyone who would still like to support, but hasn't got round to it yet, to do so to help us reach our target by Sunday."

Mr Phillimore says the public has been telling the team how much the Subs means to them and about the memories the venue holds.

"There is no doubt that people hold the Subs in their affections, and we have been thrilled with the response to our new programme of events."

He paid special thanks to local organisations for their support including Jackson Therapies, Cheltenham Everyman Theatre, Stroud Civic Society as well as the recent generous donation of £10,000 from Julia and Hans Rausing.

And if you want to have your name in lights, then the top offer is the opportunity to name the newly refurbished Art Deco bar (£20,000).

Tickets are selling well for the Subs' first post-Covid programme with shows such as The Shires and Craig Charles recently selling out. There are still tickets available for the last-minute full band exclusive with Seth Lakeman on Friday 6th August and the line-up for the Book Festival has been announced and includes Hassan Akkad, Mary Portas and Merlin Sheldrake.