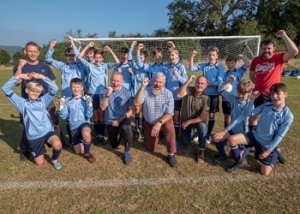 Football returned to Uplands Playing Fields in Stroud for the first time in at least 20 years.

The Minchinhampton Manta Rays, an Under 14s team at Minchinhampton Football Club, lost 6-3 tp Rodborough Rhinos in their first competitive match as a team and on the new playing field.

Coach Paul Shorrock said: "The score reflects a close and determined game of football by both teams. This is the boys' first competitive match this season after a summer of training and a very disruptive season last year. We have had a number of new additions to the team and the have made significant progress since we last played a competitive game."

The club came to Stroud Town Council, which owns the playing field, as it needed more space to play with the growing number of youngsters joining up.

"It's great to see Uplands being used when there is a local shortage of pitches for amateur sports. Open spaces are vital for our wellbeing and seeing the boys make use of it to get much valued exercise is a heartening sight," said Town Mayor Councillor Kevin Cranston.

"The boys and coaches are thrilled to be playing at Uplands as their home ground," said Mr Shorrock. "We have been made very welcome by the local community who are very positive and encouraging about the field being used once again as a competitive football pitch.

"Both the field and setting with its glorious panoramic of the Stroud valley makes you feel good about being there regardless of the outcome at the end of the game, although it is always nice to win."