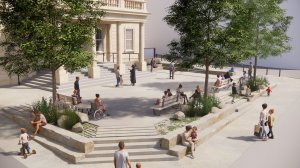 Stroud Town Council has unveiled ambitious plans to transform the public space outside the Subscription Rooms into an attractive town square.

"For decades the space outside the Sub Rooms has played an important part in Stroud town life," said Councillor Stella Parkes, Chair of the Town Council Regeneration Committee.

"The Town Council believes it is time to transform the space into a true town square to be used and enjoyed by all. If we are successful with our Levelling Up Fund bid then we can turn this into a reality."

The Town Council carried out consultations and have come up with an initial concept design. The proposal includes levelling up the area which is currently sloping and enclose it with seating, planting and a canopy of trees.

"This is Stroud's space and we want people to tell us what they think of the proposed plans and what we need to change to make this a truly accessible space which will enhance our town, not just our wellbeing but boost the local economy and support jobs."

Local materials would be used for the town square project and and rainwater from the Sub Rooms would be used to water the trees and plants. To create a greener public space, the proposal would be to replace the existing hornbeam, which does not have a long life expectancy, with three trees better suited to a town centre environment.

The project is planned to be one part of a Levelling Up Fund bid for Stroud town centre, once the Government announces bid criteria, which is expected this Spring.

The consultation period on the town square project, which starts on 21 March, will run until 29 April. People can leave their feedback on the website.

There will be a consultation drop-in session on Saturday 2 April from 10am-4pm at the Subscription Rooms. People can also vote on what species of trees they would like to see planted.

Councillor Doina Cornell, Leader of Stroud District Council, said: "This is a really exciting vision for the centre of Stroud. I would echo Stroud Town Council's call for people to take part in the consultation and have their say."