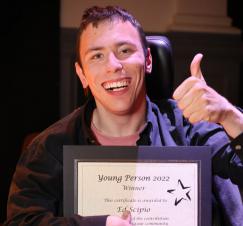 A young man with disabilities has become a well-known character at the Subscription Rooms has been named Stroud's Young Person of the Year.

"Ed is simply one of our very best volunteers – greets the audience as they arrive at the Subs and brightens everyone's day," said Hugh Phillimore, Chair of the Subs Trust.

A former National Star student, Ed makes the 70-mile round trip from his home in Devizes, often several times a week, to volunteer in Stroud.

Ann Taylor, Cleo Mussi and the museum volunteers won the community award for their incredible work in transforming a neglected outdoor space at the Museum in the Park into an award-winning, beautiful community garden which offers so much to the people of Stroud.

Gerb Gerbrands was named Trader of the Year for going that extra mile to ensure Stroud Farmers' Market always operates, especially during the pandemic.

That community effort during the pandemic was also recognised in the Mayor's Awards. James Beecher and his team of volunteers who ran the Stroud Coronavirus Community Response group received an award. The charity The Long Table also received a Mayor's Award for setting up the food scheme called Freezer of Love.

Dan Guthrie received the Inclusivity and Diversity Award for raising awareness of the Black Boy figurine and how it has affected him over the years as a figure that symbolised the historic injustice of slavery.

Fred Baker of Transition Stroud and the Stroud District CAN Network was honoured with an environment award. He has worked tirelessly to improve awareness of sustainability issues, and develop and deliver real, game-changing environmental initiatives in Stroud town and across Stroud District.

"We are incredibly fortunate in Stroud to have so many people committed to improving our town, our community and environment and so much more. I congratulate the winners and the runners-up and thank them for their efforts," said Stroud Mayor Stella Parkes.