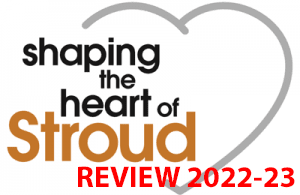 Hundreds of people have so far taken part in the opportunity to shape the heart of Stroud.

Late last year the Town Council launched a review of the Neighbourhood Development Plan (NDP). There were more than 300 visits to the website with just over 70 comments.

So far the top three priorities chosen by people for the revised NDP are:

People were asked to comment on the vision which stated "that Stroud town centre should be "a welcoming, healthy, thriving place".

Of those who responded 65% said they loved the Vision or felt it was okay while 19% said they didn't like it or felt it needed improvement.

The Council is keen for feedback from younger people (aged 13-24).

Town Mayor Stella Parkes said: "The majority of comments have been received from people who live, work or shop in Stroud. That's great news as local people are having their say about their town. What we now need are the comments and views of young people so that they can influence the future of Stroud."

While the survey on the Vision is now closed people can still identify a specific place/area within the NDP boundary, upload photos, and say what they like or what could be improved from the photo.

The majority of comments so far relate to a general untidiness of places or buildings and provide suggestions of how they think it could be improved. Other comments talk about difficult junctions/crossings for cyclists and pedestrians.

'We also need to know what people like about Stroud so that we can do our best to ensure it stays like that," says Cllr Parkes.

People can leave their comments online.