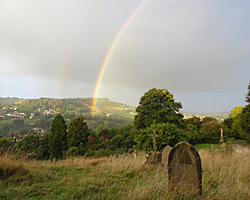 A stroll up to Bisley Road Cemetery which sits on the south-eastern edge of the town will reward you with wonderful views across to Minchinhampton and Rodborough Commons, with the aptly named 'Heavens' in the foreground. Looking westwards on a clear day will reveal the River Severn and the Brecon Beacons in the background.

The cemetery was created in the 1850s and was planted with numerous trees and shrubs, many from other lands. The graves range from an unknown amount of unnamed and un-marked resting places for those without the means to pay, many from the nearby workhouse, to the large memorials in the western part where Stroud's more celebrated folk were laid to rest. It should never be forgotten that the cemetery still has a functioning infants resting area, and all visitors are requested to be mindful of this.

The cemetery lies on a south-facing slope of unimproved grassland over a limestone shale rock structure. By 'unimproved' grassland, we mean grassland that has not been 'improved' for agricultural purposes and so still has the grass species that allow wildflower species to flourish. 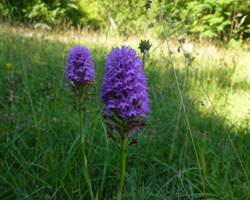 The ground has also been spared the damage done to so many wildflower meadows through use of herbicide and fertilisers. It is a sad fact that 97% of our wildflower meadows have been destroyed in the past 100 years. With the happy coincidence that the site lies on a steep south-facing slope, we have a wonderful recipe for a diverse wildlife population of plants, insects and animals.

The site has been well-known for many years as a haven for wildlife, and was designated as a Local Nature Reserve (LNR) in 2000. It is one of only a very few cemeteries in England with this status. Highgate is another example.

The sparse soils above the underlying rock have very few nutrients, which is a blessing as it is on such soils that so many native wild flower species have evolved and thrive. The lack of soil depth and nutrients stop coarser grasses and larger, deep-rooted plants from taking over. This allows a large and varied array of flowers to grow across the spring and summer, giving us much to look at and giving a tremendous variety of common and less-common wildlife the food and shelter that is so often missing. 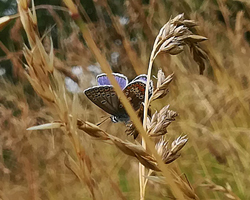 Many insects (invertebrates) need particular plant species to survive – whilst many flowers for example are good for nectar to feed on as adults, many insects need specific 'host plants' for their larvae to feed on. One example is the common blue butterfly which relies heavily on a plant called bird's-foot-trefoil in its caterpillar stage.

Having so many plant species gives a bountiful nectar supply to pollinators such as a large array of bee and hoverfly species which we need so desperately for our own survival. The insects at home here in turn help to feed many other creatures, particularly birds.

The trees at the cemetery, many planted by the Victorians, give resting and roosting stops for many birds, and some bats. Bats generally need night-flying insects (particularly moths) trees and water -with the watercourse and ponds below the cemetery we have much of what they need. We will be adding some bat boxes over time in order to increase roosting sites for bats. 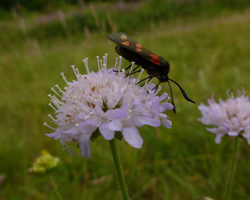 An additional aspect of Bisley Road Cemetery that is lacking many other nature reserves is the extra habitat found associated with the gravestones and memorials. Many are covered in lichens, some rare, and the collapse of some bases creates numerous hideaways for creatures to escape the threat of predators such as cat, dogs, buzzards or people!

One of the highlights of a summer visit is to spot a lizard basking on a wall or gravestone – keep your eyes focussed a good few feet ahead and see if you can spot a common lizard - whilst it is called 'common' you won't see them in that many places these days. Along with this little fellow, we also share the space with numerous glow worms, grass snakes and just a very few adders.

Adders are shy and elusive creatures that will only ever bite if feeling threatened. It is remarkable that they still hang on in the cemetery – they are now thought to be extinct in Oxfordshire and some other counties – down to habitat fragmentation through development and modern farming and estate practices. If you manage to see one, please do not get close, as they are vulnerable to disturbance and of course, the bite does need swift hospital attention. 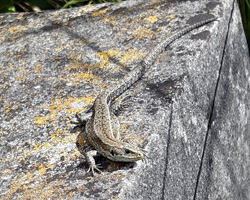 If you were to wander through the cemetery in June or July you may be lucky to spot what looks like little LED torchlights – these are in fact female glow worms, looking to attract a mate. These are yet another increasingly-uncommon creature – actually a beetle rather than a worm – that can be found in this tiny and remarkable haven on the edge of our town.

As owners and managers of this glorious site, we have a responsibility to manage in a sustainable manner; to allow the site to be a functioning cemetery, a place for people to stroll or simply sit and relax, and where myriad wildlife species can continue to flourish in the future.

A management plan for the site is written for every 5-year period. The plan is somewhat fluid as nature never fully complies with what has been written! The plan is designed to maintain or enhance the very important botanical habitat, which is mainly unimproved limestone grassland, but also areas of trees and secondary woodland. It also takes into account the various needs and niches that some of the rarer species need, but does not focus on any single species to the detriment of others. 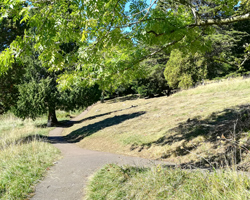 Many of the rarer species require a mosaic of differing vegetation types and heights, and so what we aim to do is provide these mosaics, by cutting vegetation in a rotational manner and at the optimum time of year to ensure that dominant species do not do so, and to safeguard vulnerable species. In some smaller areas, known as compartments, we may cut half of the grassland one year, and the other half the next, ensuring that there is always at least some of each vegetation type and height. All cutting is undertaken through the autumn and winter months, when most wildlife is safely hidden.

We are also removing some, but not all, of the Cherry laurel and viburnum that was planted in the Victorian era – these shrubs, along with a tree called Turkey oak, are invasive and will spread across the grassland. They support almost none of our wildlife. Some will be removed and some shrubs will remain, but be kept much smaller. Where gaps occur following shrub removal, and where the grassland may not return, we will plant native shrubs that will benefit our wildlife. 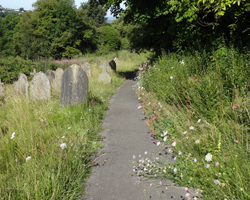 The cemetery is a freely accessible open space with tarmac paths running throughout. There are some steep slopes and the ground has hidden slip and trip hazards off the paths so care should be taken. Please come and see what wildlife you can see, but please always respect the fact that it is a working cemetery with an infant burial area and a wildlife haven. As such, all dogs must be on leads at all times and dog mess cleared and placed in the bins provided.

If you wish to get involved with winter work parties please get in touch and come and help us improve the site for people and wildlife.