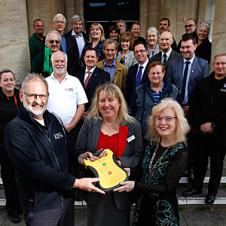 Five public access defibrillators were installed in town centre locations in 2018, thanks to an initiative by Stroud Town Council.

The life-saving device, which can shock a person's heart back into a normal rhythm if they go into cardiac arrest, have been fitted at the HSBC UK in King Street, Midcounties Co-operative Food in Slad Road, The Door Youth Project in the High Street, the Cotswold Playhouse in Parliament Street and the Cotswold Canal Trust visitors' centre in Wallbridge.

A sixth machine has been donated to the Street Pastors by the Community Heartbeat Trust which worked with the Town Council on the project.

"Thanks to the incredible support we have had from individuals, organisations and business we have reached our target in just 10 months," said Town Deputy Mayor Margaret Poulton.

Resident Jenny Harding worked with the Town Council to help raise the funds. As Jenny works as a Universal Banker at the HSBC UK Stroud branch, the bank match funded her efforts.

"Our previous branch manager suffered a cardiac arrest and thankfully survived, but it brought home to branch colleagues how important it is to have defibrillators available in Stroud," said Jenny.

"We worked hard to raise almost £4,000 towards the cost of the defibrillators and raise awareness for the need for having them in the community, and are extremely proud to see them in place, including on the wall of our own branch."

It is not necessary to be trained to use a defibrillator. When someone calls 999, they will be given the location of the nearest defibrillator and a code to use it. The machine gives the user clear instructions.