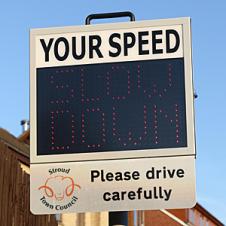 The displays on the VAS are turned on for 2 weeks in every 8 but continue to collect data 24/7.

The displays are switched off so that drivers do not become too accustomed to the signs and start to ignore them.

The data is sent to the police who are the speed enforcement agency.

Safe and Social Driving remains a priority for the PCC.

In 2016, Stroud Town Council was invited by the Police and Crime Commissioner (PCC) to apply for funds to buy Vehicle Activated Signs (VAS) for Stroud Town.

The Commissioner's Fund earmarked funding to address the PCC's priority for Safe and Social Driving in Gloucestershire.

Stroud Town Council asked members of the public to identify locations where VAS might be particularly useful to highlight driver speeds to motorists, in the hope that drivers would police their speeding and meet the speed limit.

There was a huge response from the public. Hundreds of people identified 12 areas for the cameras, which were subsequently assessed against Highways criteria.

There are 5 criteria for a mobile VAS site:

The site must pass on speed and community support and 2 of the remaining 3 criteria.

There were some additional issues in locating the VAS. The project had initially identified the potential to hang VAS off lampposts, creating a network of flexible locations for the signs. Unfortunately GCC withdrew permission to use lampposts, citing the weight of the cameras to be an issue. This caused delay to the project, however in partnership with the County Councillor and Local Highways Manager the Town Council was able to establish 5 locations in the town where Highway's funded posts could be installed.