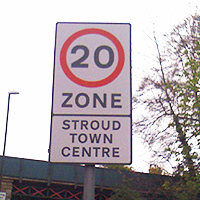 Stroud Town Council and Gloucestershire Constabulary are working together to tackle speeding motorists.

Councillors allocated some of their Road Safety Budget to purchase Stroud Police a new speed gun to enable the police to do more enforcement activity.

The Vehicle Activated Signs around the town and the Community Speedwatch undertaken by the residents have revealed that there are some motorists travelling at excessive speeds around the town, particularly in the 20mph zones in the town centre.

"Whilst the Constabulary do already own similar devices they are generally operated by officers from our Roads Policing department who are based near Cheltenham," said Sgt Gloyn.

"We will also be able to put it to good use supporting our volunteer Speedwatch groups in the Stroud area by targeting the persistent speeders that they bring to our attention."

During the first use of the speed gun the police stopped and warned four drivers for doing speeds of 24mph and 26mph in London Road, near Waitrose, over a 45-minute period.

Then three drivers were ticketed for speeds of 39, 40 and 42mph in Dudbridge Road with a further three warned for speeds only slightly over the 30mph limit.

"Residents are very concerned about this anti-social behaviour and this speed gun will give officers a greater capacity of doing more to make our roads safer for all users," said Stroud Town Mayor Kevin Cranston.